Tejo arrested Jasmin gets enough of Tejo. She can’t take Fateh also repeating Tejo’s name all the day. Fateh becomes thrilled seeing Simran home. He is obliged to Tejo who made the impossible possible. He feels nobody else could have encouraged Khushbeer to embrace Simran. He likes to see the family happy with Simran. He advises Jasmin to keep herself away from Simran, if she can’t give any happiness to her. He doesn’t want Jasmin to speak poorly about Simran and Tejo.

Simran also wants Tejo and Fateh to be back together. Jasmin decides to build a trap for Tejo once again. She makes a call and speaks as Tejo Virk. She keeps the scheme a secret. She explains that she has made arrangement to send Tejo away from the residence. Jasmin talks as Tejo on the call, while nobody gets aware of it. Later, Fateh gets a call and finds the police has arrested Tejo. He worriedly tells that he would rush to the police station and visit Tejo.

Jasmin sees him disturbed and overhears his chat. She is delighted that Tejo got detained. After Fateh leaves, Jasmin explains that Fateh would be going to the police station, but is no use, he can’t help Tejo this time. She claims that even Fateh won’t be able to aid Tejo and save her from the massive catastrophe.

She is satisfied that Tejo will become rotten in the jail for few days. She wants Tejo to suffer and leave from Fateh’s life. What has Jasmin done to get Tejo arrested? Did she ring up Jass and lay a trap for Tejo? Jasmin will be using Tejo’s past to harm the present and future. Jass will be shortly entering Tejo and Fateh’s lives. Jass and Jasmin will be joining hands and become the villainous duo to wreck Tejo and Fateh’s marriage. Can you predict what is Jasmin up to this time? Comment below. Keep reading. 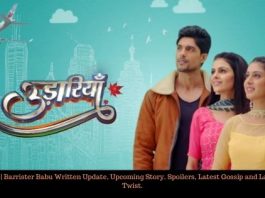