Preeto begins the episode by informing everyone that she has made a decision. She stayed with the infant all night, and she reminded her of Heer. As though Heer had returned to them. Preeto has expressed an interest in adopting the youngster. Saumya is confident that they will adopt the child.

Preeto claims that she will lavish the same amount of love on the child so that no one can blame her. Harman wonders why people would do such a thing. Preeto claims that the infant is a kinnar, not a girl. Everyone is taken aback.

Saumya informs Harman that they were unable to inform him of her true identity due to a lack of time. Harman claims that they will strengthen the youngster so that she may face the world without fear. According to Chintu, an unidentified child will inherit all rights, but not the true heir. His family would rather have a kinnar than their son. What a disaster. He also has negative things to say about Heer.

Virat smacks Chintu and tells him not to speak ill of Heer, but Chintu slaps him again, and the two fight. Harman puts a stop to it. Chintu questions why people place such a high value on a kinnar. Preeto claims that this is her home and that she would prioritise the baby.

Chintu is irritated, so he provokes Raavi by claiming that her family wants to disown them, which is why they are prioritising a kinnar. Harman storms over to Chintu, enraged, but Saumya calms him down. Someone breaks the window of the house to deliver a message to the family in the form of a letter. Harman reads it, which is a threat, and it states that the child must be returned or else there would be repercussions.

Harman is perplexed as to who sent it. Saumya claims it was done by Angel. She was released on bail and went to the hospital to pick up the baby, but the cops threw her out. Viran claims that they have already dealt with numerous issues as a result of these kinnars, and that if any of them is injured again as a result of the kid, they will be unable to cope. Simran backs Viran, while Raavi warns that their decision could put them in danger again. They sacrificed everything for Heer and have no regrets. They can’t invite more difficulty by embracing another transgender child, and they don’t have the stamina to fight another battle.

Chintu claims that he can profit from their conflict. Saumya says she understands their fear, but they can’t simply hand over the innocent child to Angel. Angel has damaged a lot of people’s lives, so they can’t let her ruin another one in order for the kid to stay with them.

While everyone is sleeping, some masked men break into Harman’s house. By unlocking the door, Chintu assists them. Preeto wakes up after the masked guys steal the infant from her bed while she is sleeping.

Harak and Preeto begin yelling for assistance. The captors attempt to flee, and the entire family awakens. Raavi is injured when one of the kidnappers pulls her away. Chintu had her in his grip. By displaying a knife, the kidnappers intimidate Harman’s family. Saumya tosses a vase at a kidnapper, who injures himself and throws the infant upstairs. When Saumya and Harman see this, they are taken aback.

Saumya and Preeto dash to the rescue of the infant, who is about to tumble. Saumya finally saves her, and they are relieved. Harman, Harak, and Virat pursue the kidnappers, who flee.

Saumya can’t keep flopping his plans, Chintu believes. He’ll give it another shot. Preeto wonders why the infant is sobbing so much. Harman claims they were unable to apprehend anyone. Saumya claims Angel is doing all of this, and she is attempting to kidnap the baby from them. 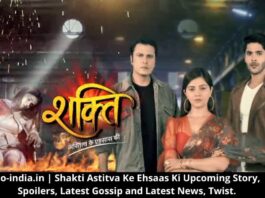