The episode begins with Bondita standing confused between the jackets. Koyeli signals her to keep the jacket with Aniruddh’s smell. Bondita keeps the jacket. Manorama checks her jacket and feels relaxed. She decides to keep the jacket in a safer place. Binoy asks the servant to take care of the gifts. Trilochan thinks that it would be a tight slap on Thakur’s face when Bondita welcomes the Viceroys. Bondita thinks she will only welcome the Viceroys. Aniruddh comes and asks Bondita not to be upset if she couldn’t welcome the Viceroys. He was about to tell Bondita about the interview but Trilochan calls Bondita.

Manorama gets ready wearing the jacket. Bondita too gets ready and thinks that Aniruddh would be proud of her. There, Koyeli and Vihari tell Trilochan that Bondita always worships Durga Ma before going for big work. Aniruddh and Manorama go to Dugga Ma temple. Koyeli and Vihari hide Bondita in the car under the gifts. Aniruddh praises Manorama. Aniruddh thanks Manorama for impressing the Viceroys. Bondita thinks why Aniruddh is praising Manorama. 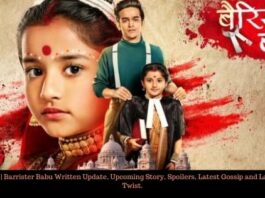